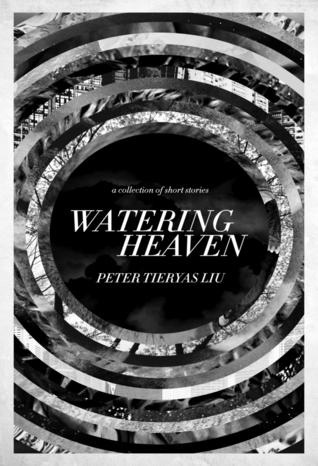 What would you do if you found out your girlfriend laid an egg every time she had sex? Who would you be if you were invited to a party in Beijing but had to make up a brand-new identity for six weeks? Peter Tieryas Liu’s Watering Heaven is a travelogue of and requiem for the American dream in all its bizarre manifestations and a surreal, fantastic journey through the streets, alleys, and airports of China. Whether it’s a monk who uses acupuncture needles to help him fly or a city filled with rats about to be exterminated so that the mayor can win his reelection bid, be prepared to laugh, swoon, and shudder at the answers Liu offers in this provocative debut collection.

What’s the meaning of life? Few writers risk asking such a naive question anymore, but Peter Tieryas Liu’s debut collection probes the membrane of modern meaninglessness in consistently passionate and original prose. With its robust inquiry into “love’s very anatomy,” Watering Heaven underscores the babble of the global village from inside China’s Forbidden City to inside the bacterium of the hand that holds the ubiquitous videogame joystick. Liu showers us with tales of seemingly lost and strange people who could be a lot more like us than we care to admit– a photographer who collects pieces of humans, a loner who listens to other people’s phone conversations, a politician who tries to stave off a mutant rat rebellion, and a saga of shit-covered shoes. Liu’s brave new world comes at us full-force with a spinning Blade Runner intensity, keeping us guessing as it keeps us on the edge of our postwar, pre-apocalyptic seats. Encore! Encore!

A surreal menagerie of short stories that sometimes veer into the realm of magic realism, Peter Liu’s Watering Heaven explores the lives of those drifting in an existential sea that is our urban post-modern landscape. Whether set in Beijing, L.A., or New York, there is something both slightly haunting yet inviting in these tales of love and loss, connections made and broken, but never forgotten. Mr. Liu displays a deftness in his writing that is both sensitive and intelligent. He’s a writer to look out for.

Peter Tieryas Liu’s debut short story collection Watering Heaven is edgy, clever, and memorably innovative. He masterfully treats his panoply of characters—an eccentric but lovable production assistant from Shanghai, a photographer of urban legends, a corpulent engineer with the solution to cold fusion, a bacterium spliced into a billion-celled organism called Habit, a failed suicide artist in love with a with a failed food artist—with a vibrant swirl of wit, compassion and astonishing respect. Liu’s untainted directness of language, his richness and precision to detail, as well as his surreal brilliancy and vulnerability reminds one of the very best of Borges, Calvino, Pynchon. Jolts of spontaneous wisdom, inquiry, as well as ethnic familial tales and euphemisms coming from the mouths of Liu’s heroes and heroines beg the reader to think inward, to test the assumed norms of everyday existence, to aspire to something greater—the unhinged capacity of what is curiously new, prophetically needed. Here is an author who single-handedly breaks the sun in half with sheer novelty and song.

Peter Tieryas Liu’s ear is expertly attuned to the zeitgeist—the tangle of our social networks, our cubicle culture, the language of science—but the brilliant, haunting stories in Watering Heaven are always leading us somewhere deeper yet: that fathomless reservoir of human need and longing. Like flashing neon signs with some of their letters shorted out, Liu’s characters are sundered, yet continue to function, their messages unmistakable as they urgently attempt to communicate with one another and us, again and again.

Exuberant. Wildly inventive. Grungy, grimy, gritty with global resonance for the 21st century, Watering Heaven boldly treads where devils fear to go. This debut collection of madly manic fiction rides bareback over the rocky metaphysical divide that is Asia (especially China) and the U.S.A. And the journey is bleakly compassionate. These are curious fictions, bordering at times on meditations about the unpredictability and possibility of existence. In particular, the problem of love is always at the forefront, as people meet and part, vanish and return, die and resurrect in a horrific relationship to the blatantly, and even grotesquely, physical. Liu’s protagonists are forever in search of the perfect connection with the partner who will pull them out of their own skins; at times this restlessness is disturbing and weirdly extremist. Yet at the center of each story is a pulsing, beating heart that seems to whisper: try, try, don’t stop trying, heaven is just around the corner. An astonishing energy prevails throughout the collection. This is definitely a writer to watch.

– Xu Xi, Author of Access: Thirteen Tales and Habit of a Foreign Sky

Get a free copy of Chronology of an Egg here as a companion to this book.

Peter Tieryas Liu has almost 200 publications in magazines and journals including Adirondack Review, Camera Obscura Journal, Evergreen Review, Gargoyle, Indiana Review, Word Riot, and ZYZZYVA, and was the recipient of the 2012 Fiction Award from Mojo, the magazine run by Wichita State University. He has also worked as a technical writer for LucasArts, the gaming division of LucasFilm. By day, he’s a VFX artist who has worked on movies like Men in Black 3 and Alice in Wonderland. You can find him at www.tieryasxu.com… as well as traveling the world with his wife.