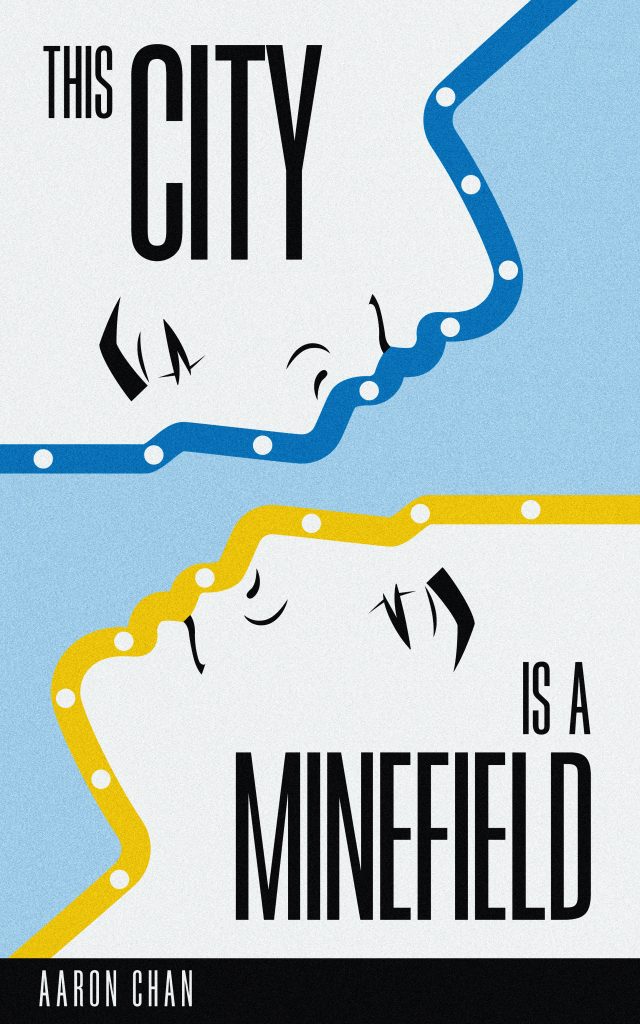 Synopsis:
This City is a Minefield is a collection of reflective memoir and personal essays told from a genuine and unique voice about growing up and coming of age as a young gay Chinese man in Vancouver. Thoughtful and honest, the stories and essays recounted are unafraid of analyzing and criticizing the status quo, whether it be Chinese culture’s unfavourable view of homosexuality, or the gay community’s ill-addressed, rampant sexual racism. At the same time an intimate, tender love letter to Vancouver filled with mixed emotions – joy, nostalgia, sadness – Chan weaves together poignant, heartbreaking experiences of navigating and reconciling conflicting cultural and queer identities, complicated romantic relationships, sex and trauma, and overwhelming loneliness that coalesce to form a rounded portrait of a quiet soul on a search for love and belonging. This City is a Minefield serves as a marker of life as a young queer person of colour in this modern age.

Blurbage:
“Soulful and intimate, Aaron Chan’s debut slips us between lives. By turns comic and wrenching, The City Is a Minefield is the remembrance of an ongoing search; in unanticipated ways, in revelatory moments, he finds ways to both survive in, and reimagine, our world.”
— Madeleine Thien, author of Do Not Say We Have Nothing; winner of the Giller Prize and the Governor General’s Award (Canada)

“Aaron Chan’s voice is both tender and commanding as he leads you through This City Is A Minefield. Sit with him in front of his parents ‘70s Zenith console TV to watch Chinese soap operas or follow him through the steam-filled maze of a gay bathhouse. Wherever he takes you, he does with unflinching openness. A captivating debut—I’ll follow Chan anywhere.”
— Amber Dawn, author of How Poetry Saved My Life: A Hustler’s Memoir

“A searing collection of contemplative and autobiographical musings that confront the challenges of a young gay man’s life with astonishing courage and candour. You won’t be able to put it down.”
— Andreas Schroeder, author of the autobiographical novel Renovating Heaven

“This City Is a Minefield is a smart and beautiful collection of autobiographical essays that movingly captures and explores the gay Asian experience in the West, as Aaron negotiates and navigates the tumultuous terrain of representation and intersection of sexual identity and race — the heartbreaks, the joys, and above all, the resilience. My only wish after reading it is that the book had been published much earlier so that my younger self could have devoured and learned from it!”
— Edward Gunawan, writer-filmmaker

“This City Is a Minefield is a well-considered and insightful rumination on Vancouver — one that both challenges and confirms its reality as a city that is multicultural in its makeup, but haunted by an enduring legacy of white hegemony, publicly, privately, and sexually. Aaron Chan’s voice is one that we urgently need, and thankfully have, in the form of this critical new memoir.”
— Wayde Compton, author of The Outer Harbour

“In This City is a Minefield, Aaron Chan has drawn an honest, moving portrait of what it means to live and grow up as a ”third-culture” kid in Vancouver’s Cantonese and gay communities – and what it means to feel never Canadian enough, never Chinese enough, and never beautiful enough to love and be loved.  In crisp, spare prose, Chan strikes familiar notes in the Asian diasporic narrative while adding his own distinctive counterpoint meditations on the meaning of purpose, desire, and beauty. This is a lasting contribution to the growing canon of Asian queer literature, and a must-read for all of us who have struggled to know the meaning of home.”
— Kai Cheng Thom, author of I Hope We Choose Love: A Trans Girl’s Notes From the End of the World

“This City is clearly the work of a seasoned storyteller with a strong point of view. Its episodic style makes it easy to take breaks when the subject matter grows harrowing, and Chan’s sense of humour reminds you that despite one’s marginalizations and life trials, it is possible to find joy in day-to-day life.”
— The Malahat Review

Author bio:
Aaron Chan was born in Vancouver, British Columbia, Canada, and is a musician, filmmaker, and writer. He is a graduate of the one-year Screenwriting Program at Vancouver Film School as well as the Creative Writing Program at the University of British Columbia. His writing has been published in literary magazines including Wilde, Ricepaper, Existere, Plenitude, filling Station, Polychrome Ink, and others. His memoir piece “A Case of Jeff” won subTerrain‘s Lush Triumphant Literary Award in 2013. The following year, his play In the Movies was selected for production as part of the Brave New Play Rites Festival, and in 2017, Romantic Hopeless, his first poetry chapbook, was published. This City Is a Minefield is his first book. Aaron still lives in Vancouver with his cat, Batman.